Eddie desperately wants a penguin as a pet, but big problems arise when he tries to get one.


Here was the question put to me by another author:

I was wondering about your Eddie Pipper book? Would you say that you planned out the whole story before writing it or did you plan some and then other parts fell into place?

I did start the story with a premise: a boy wanted a penguin for a pet. (based on a comment from my grandson)

Because the brief asked specifically for humour (and kids love it and I like writing it, though it's hard at times!) I knew that Eddie had to be all consumed. That everything had to spin off this obsession of getting a penguin. The way he saw things, interpreted things and his motivation in all things had to spring from this source.

In the prelim work, I interviewed Eddie. I wrote down questions and then wrote down what I imagined he said. Also, apart from his penguin obsession, I gave him a 'fault'; that is, 'forgetting'.

So after I had a character with a strong, all-consuming goal and a fault to provide problems, and exploring some further inroads into his character and family set-up by means of interviews, I began to jot down any little scenarios which I thought could provide humour ie: leaving his little sister, dressed as a penguin, in a wading pool full of iceblocks.

Once I had an idea of how it could begin, I did some rough notes of what could happen in future chapters. At that stage I didn't know quite how it would end, but when I bounced the idea off Eddie finding a dog (or rather, a dog finding Eddie) to my grandson, he thought that would be okay,  hence I began to work towards that.

I used several incidents remembered from real life: ie. when little, a girlfriend of mine actually did wander home late, having forgotten it was her birthday and there was a party waiting for her at home.
I took it slowly, using an exercise book to jot down notes, ideas, future chapters etc. as I went along.

So, the whole plot was not cut-and-dried to begin with,  but I did have building blocks in place, so I didn't veer off the rails too much, but allowed time and new ideas to germinate or discard as I went along.

A couple of other points. At first the boy's name was Archie. But then I decided he needed a name to rhyme with flipper and I chose Pipper. And I thought Eddie sounded stronger than Archie in that instance.

The other point was a little bit of serendipity. That is when I discovered, by doodling, that you could create a penguin by adding lines to the number 9. That got me excited! That's when I decided Eddie was going to have a birthday – which led me to thinking about him missing the party and in fact, missing out what he'd wanted all along. The hard thing was how to marry the idea of conservationism and a boy's yearning so they came to some satisfactory, but realistic scenario at the end. 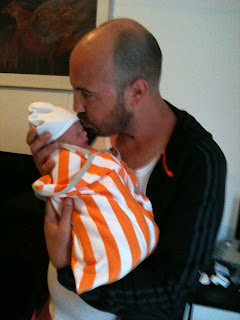 I was so proud of him.

I hope he knows what a wonderful, enriching experience that will be for his son and how that will help develop his love of reading in the future.