I love the act of creating.

It is the most exhilarating, frustrating and wondrous thing in my opinion. So when I was asked by the publisher of New Frontier if I would like to submit a story for their new series called Little Rockets, I agreed. The stories were to be for children 7 years and upwards.

Then came the big question. What am I going to write?

Around that time my grandson was talking about penguins. I’d love one of my own, he said.

And there it was. The zing point of my story!

So came a boy called Eddie Pipper (rhymes with flipper!). I had his goal, his want or desire, but what was his flaw?
Well, Eddie FORGETS.
He forgets he’s put his little sister, dressed as a penguin, in a wading pool full of icecubes. He forgets he’s told her to stay there until he comes back with a nice fish or two.

So, does Eddie get his penguin? Or does he have to make do with the papier-mâché model he’s making? 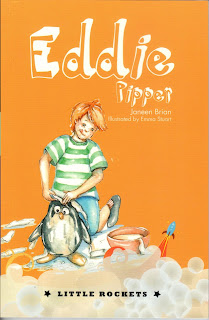 Hmmm. I wonder what happens?