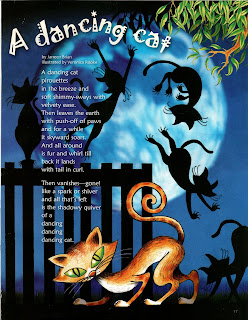 I love the excitement and anticipation that those two connected words create! I’d put them in the same category as the words surprise and serendipity!

I prefer to read poetry to children without first showing the illustration or displaying it as I read from the magazine or book.

I want the children to listen to the poem.

Afterwards I have several questions.

Did this poem remind you of anything?

What were your thoughts as I read the poem?

What word-pictures came into your mind?

During a recent school visit, I read a published poem of mine, called Dancing Cat.

I held back from showing the picture, explaining that the illustration is only one person’s way of seeing the picture. I wanted the children to appreciate the fact that their own word-pictures were equally valid before offering another image. However, I also added that an illustration could also expand thoughts and ideas as well as displaying different media or techniques.

When I asked about word-pictures, one boy said he imagined a cat leaping in the air – which happens in the poem. It was a bald comment, without much detail. By gently questioning further, I was able to encourage the boy to offer more information. In the end, he said the cat had long brown-and white fur that swished and swayed as it leapt. Beautiful!

I heaped praise on the boy’s expanded comments, suggesting that now I could see the idea of his imagined cat, because of the word-pictures he gave back to me.

By now there were plenty of hands in the air. Here’s a few of mind-pictures from others in the class.

A pure white cat in a tutu leaping from a brick wall.

A brown cat in a pirate’s outfit.

A cat with fluffy black fur and eyes like stars.

It excited me to see how much richer the children’s mind-pictures were when they allowed themselves to offer extra details.

The teasing-out had paid off!