Rhythm, rhythm, everybody’s got a bit of rhythm!

Rhythm, rhythm, everybody's got a bit of rhythm! 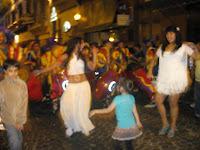 What is it about a beat or a pulse that makes our fingers click, our head nod and our toes tap? And more to the point why do some people happily clap and dance as children and then suddenly stop, the rhythm in his/her body seeming to have evaporated? Is it that in our Western in order to be allowed to dance or sing or move creatively.

As an author or illustrator, were you aware of rhythm in your childhood? Did you clap and dance spontaneously and did your body movements flow on easily to language with the simple, enjoyable rhythms of nursery rhymes and beyond?

I believe that our inner bodies are like the sea, full of fluidity and movements, ebbing and flowing. We are made up of approximately 70% of water, so I feel that we are born to move rhythmically and that that movement may later affect our patterns of reading and writing.

While I haven’t conducted tests to prove this, I know that back in the days when I was teaching and used improvised movement in drama with my class, the energy that was released by the children’s movements often translated into a release of their free writing. And even further, the style of music played or enjoyed, often affected the style of their writing if we wrote immediately afterwards. Strong drumbeats produced strong, thudding pieces with short, tense sentences, whereas slower, more tranquil music seemed to produce more lyrical writing.

In a supermarket once, I saw a little boy happily tapping on a cardboard box, his eyes shining and his body moving to his own created patterns. Up came his father and ordered him to stop. ‘It’s not a drum!’ he added crushingly. And the understated message to his young son . . .? You guessed it.

But here’s a different scenario.

Recently I returned home from a two-week holiday in Buenos Aires and while there, chanced to see a night street parade, only a block away from where we were staying. 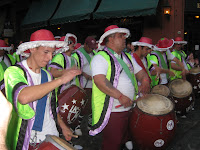 Hundreds of drummers in different groups, all dressed in bright colourful outfits drummed and sweated their way along the cobblestones, led by men waving flags as large as sails and women wearing attire ranging from African cloth swathing to feathered bikinis; all dancing hard and happily for block after block. 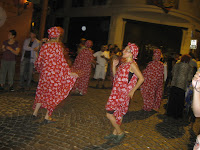 Standing there, watching, camera poised, I could feel my blood begin to pulse until I could no longer keep still. I began to dance along with everybody else! As each drumming group passed by, bystanders followed, dancing and moving in a free, joyful, uninhibited way; children, adults and old folks alike.

It was obvious that the people were blissfully responding to the beat and rhythm that had been part of their cultural life for as long as they could remember, whether it be in music or dancing. 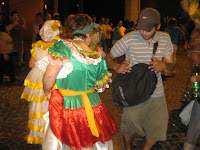 Let’s take that thought back to childhood. Hopefully, babies and toddlers grow up in an environment where there are songs and stories, but now, there are also lovely storytime/playtime/rhymetime sessions held at public libraries. At these sessions, toddlers independently clap and move to the rhythm of spoken nursery rhymes or action rhymes, while adults gently encourage the babies with their movements - singing or speaking as they do so.

Surely this provides an early awareness of the connection of movement and the spoken word and, moreover, might also set the basis for our children’s future love and enjoyment of poetry and the rhythm of literature.

And, if that is so, then let’s make certain we continue to embrace those rhythms at every opportunity- freely and joyfully!